Times Square Mall - All your shopping needs under one roof!

Here in Korea I've noticed a bit of a trend starting to emerge. They seem to like naming things after famous American hot spots. Yeouido is referred to as Korea's Manhattan, there's Rodeo after the famous Rodeo Drive and there is Times Square a mall in the south west of Seoul.

Although they don't really bare much resemblance to their namesakes they are all great places worth visiting.

I only found out about Times Square by chance. A friend of mine posted a picture of it on Facebook. To me it looked like it could have been a picture from her home town in America. I was pretty excited to visit when I found out it was actually here in Seoul. I love the design of the mall, it has a galleried centre with a glass ceiling so it's really light and airy. For some reason I never feel like I'm in Korea when I shop here, I think it's partly due to the layout being unlike anywhere else I've been here.


There's a lot of stores you'll have probably heard of here even if you've not been in Korea long. On the ground floor you can find Mango, Zara, Steve Madden, Nine West and Bean Pole.


On the second floor there's lots of smaller shops like an Apple Store, Kyobo book store, Swarovski, 7 For All Mankind, GAP, The Body Shop, Muji, The North Face and a few more Korean brands. There's also a store called Francfranc which is full of cute trinkets and soft furnishings for your apartment, I love it!

The third floor somehow packs in even more stores including Accessorize, Levi's, Puma, Guess, Nike. There's quite a few of the Korean stores on this floor too like ABC-Mart (a shoe store), Eblin (Lingerie), Who.A.U (A similar style to American Eagle and Hollister), Giordano (Clothes) and the cosmetic stores Etude House and Olive Young. Up here there is also another home furnishing store called Modern House. This one sells a wider variety of home items including some furniture, cookware and soft furnishings. It's very reasonably priced too. Another of my favourites to browse!
﻿﻿﻿

﻿﻿﻿When you get tired of shopping and need to re-fuel there are plenty of options. Of course there is all the usual coffee places and fast food outlets. If you're in need of a proper meal though there's plenty of places to choose from too. Don't miss the basement area where there's On The Border (a fairly decent Mexican restaurant), Bulgogi Brothers, Kraze Burger and Saboten to name just a few. There's also an E-Mart down there too. I told you this place has everything under one roof!

Times Square, like most malls in Korea, also houses a movie complex, this one is a CGV. The special thing about this movie theatre though is that it has a 4D theatre. The seats move (quite a bit too - forwards, backwards, sideways, vibrations - you name it, they do it!), air will be blown in your face and your ankles might be whipped (not as painful as it sounds!).

Word of warning here though...I made the mistake of seeing Kung Fu Panda here....Eurgh! By the time the movie was finished I felt like I'd taken a beating and at one point  I nearly lost my drink due to a bad timing with a forward tipping movement. It wasn't the most relaxing movie experience I've had but it did add another dimension that's for sure! 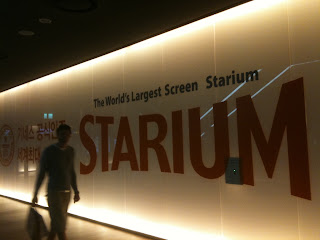 I'm not too sure what the Starium is but I'm lead to believe it's a really wide screen. So wide that it won a world record according to the signs. I've not watched a movie in there yet but I want to try and check it out sometime soon.

So now you know about Times Square you'll need to know..... how to find it!

Times Square is located closest to Yeongdeungpo station on line 1.  You should go out of Exit 3 and walk across the main road down the street opposite. You'll pass a Family Mart and then Shinsagae Department Store. Times Square is right after that. Alternatively if it's raining I think you can actually access the mall underground directly from the subway station. I haven't tried this myself so you'll have to look for signs. Either way it's pretty difficult to miss since it's HUGE!

Just in case you're not too sure though I've made you a map to help! ^^

You can check out more (in English) about Times Square Mall here :)

As always feel free to ask me any questions or leave me a comment to let me know what you think of the mall if you visit. Don't blame me if you spend all you're money though! 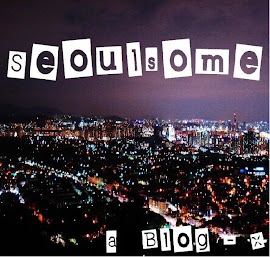 I first visited Seoul back in 2007, the city has grown so much since then. New people, new places, new experiences. There's so much I love. Seoulsome is about sharing the things I like. Enjoy!